I came back from my regular travel a few weeks ago. This time I was travelling around countries of the Middle East and also visited Nepal and India. Today I’d like to tell you about Israel. I had been there for a little less than a week, but had time to visit all the interesting regions except Palestine. Enjoy. Next entries will be about Jordan, Lebanon and Nepal.

Before the trip to Israel I had been told that roofs in there are hard to get to, security guards are armed, and there are lots of police officers in disguise and other “nice things”. But in fact everything turned out to be very easy: it’s no problem to climb to all of the 5-star hotels, and construction sites are guarded by 1-2 guards and they don’t even stay there at night. 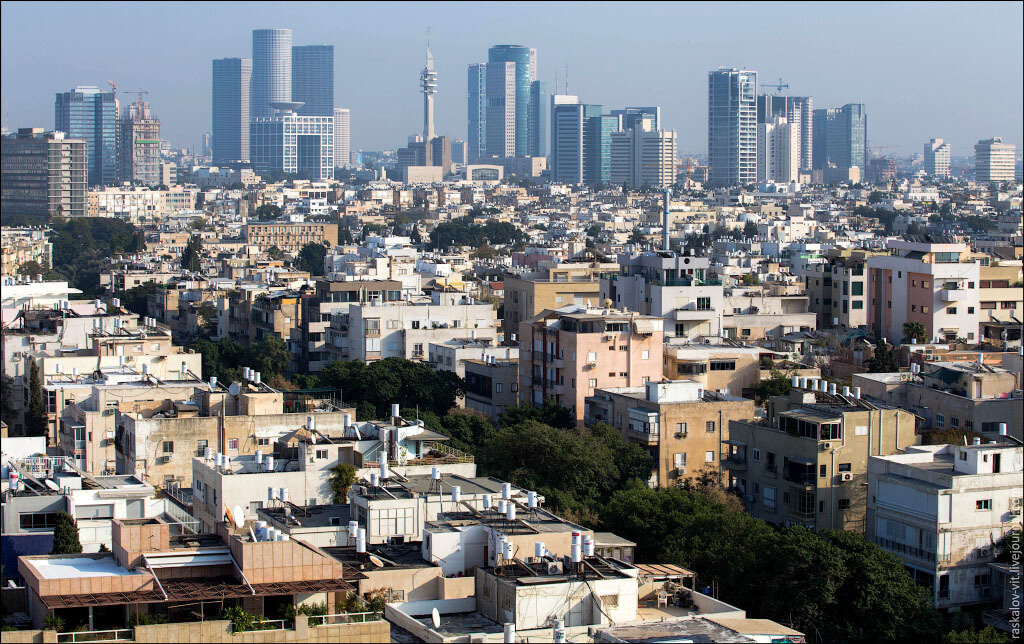 2. Okay, let’s start to meet the city. Tel-Aviv is located on the East side of the Mediterranean Sea, winter here is warm and rainy. The best time to visit the city is November and the first half of December. 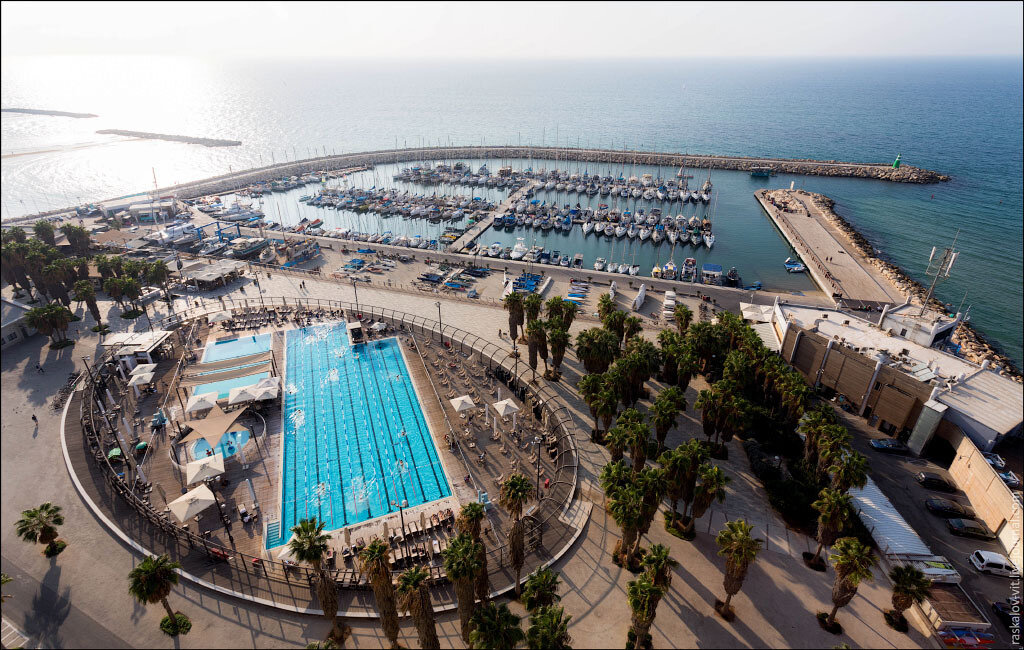 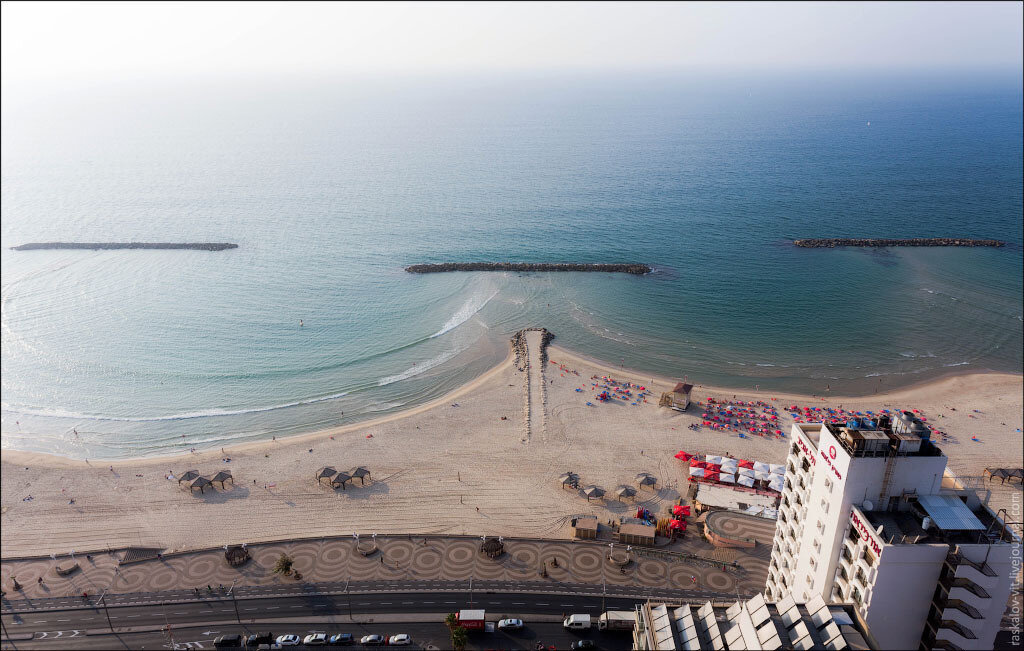 4. Hotels and office buildings on the sea-front of the Mediterranean Sea. 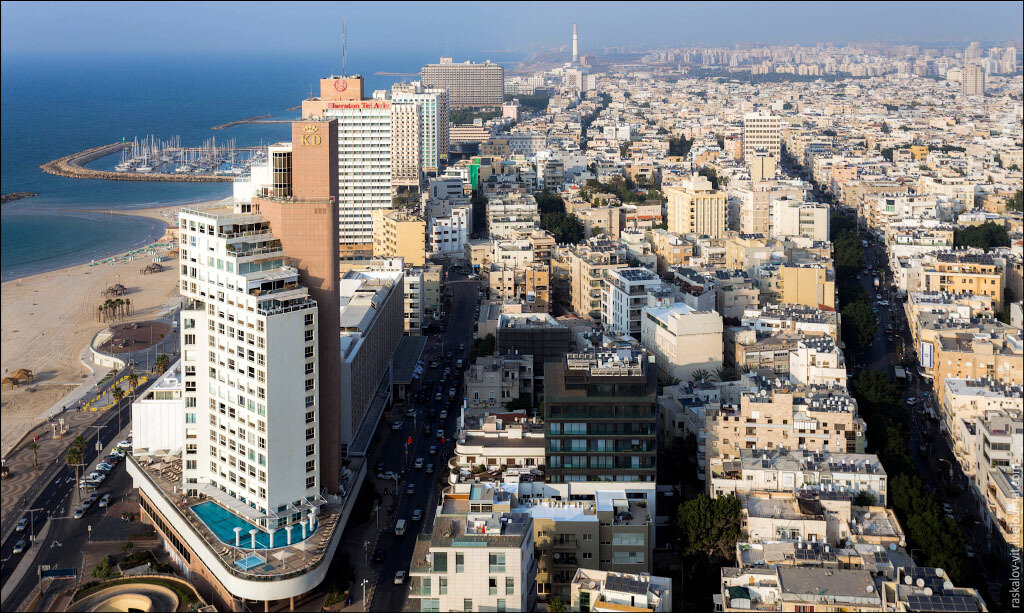 5. Tel-Aviv is the most eclectic (contradictory) city in Israel. Modern skyscrapers along the Ayalon highway co-exist with one- and two-storey houses of the first half of the XX century in the district of Neve-Tzedek; rich districts of northern Tel-Aviv co-exist with ghettos of the old Tahana-Merkazit (the city’s bus station); hotels and pubs on the sea-front of the Mediterranean Sea co-exist with offices of business and technological centers. 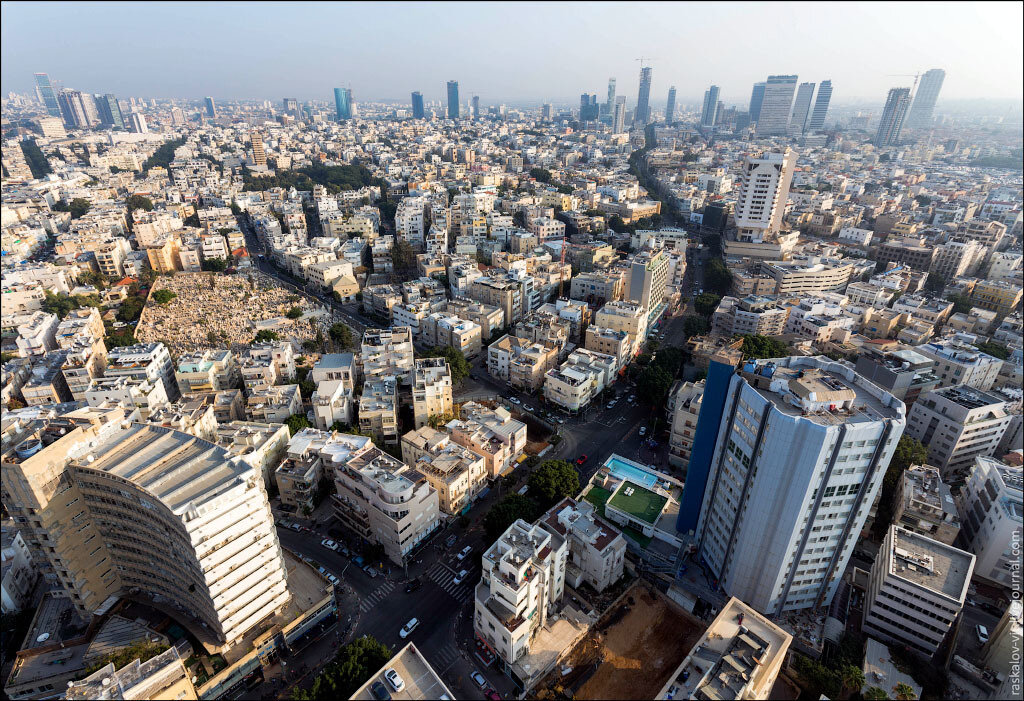 6. The night before going to Jerusalem we decided to get to the highest construction of Israel. The building is 150m high – nothing for Moscow but for Tel-Aviv this is a skyscraper. 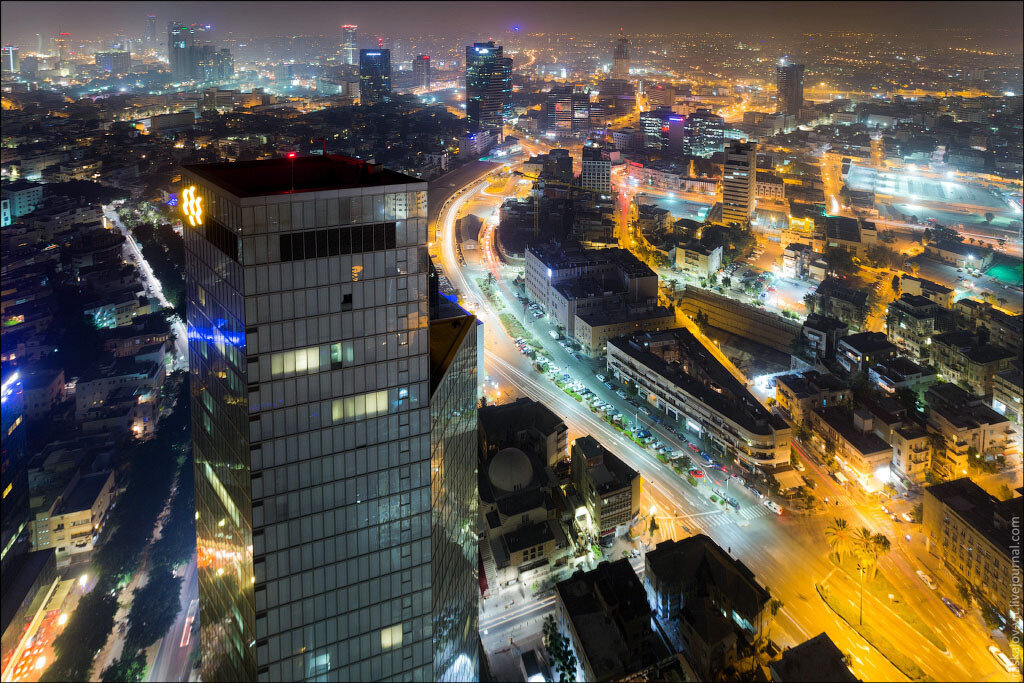 7. One of the fails: my favorite pants from New-York got ripped against one of the reinforcement bars. 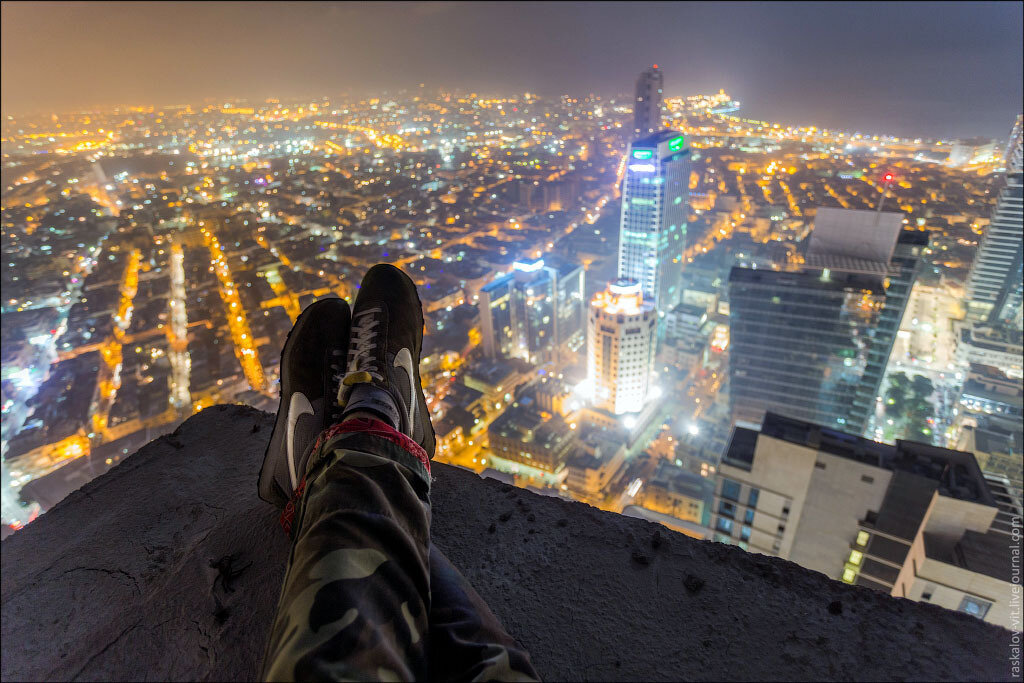 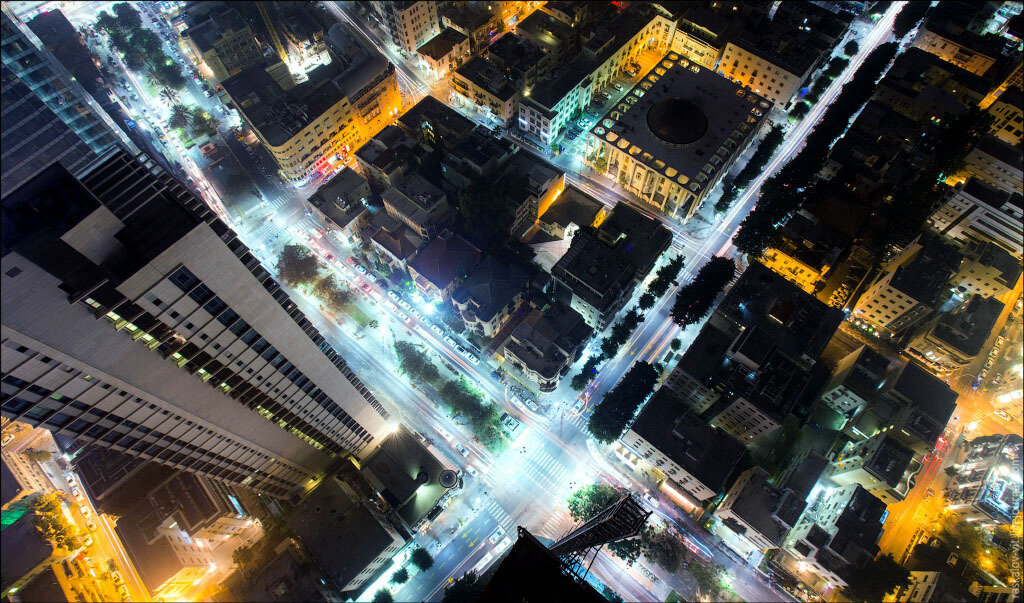 9. I met a great guy Alexei in Tel-Aviv, who had immigrated to Israel a few weeks before. He didn’t only agree to rooftop and travel across Israel with me, he also let me live at his place. Thanks to him a lot for that! If anybody’s interested: he was working for a long time for Nike and we even have common acquaintances in this company.
Lesha’s page: https://www.facebook.com/chigretskiy 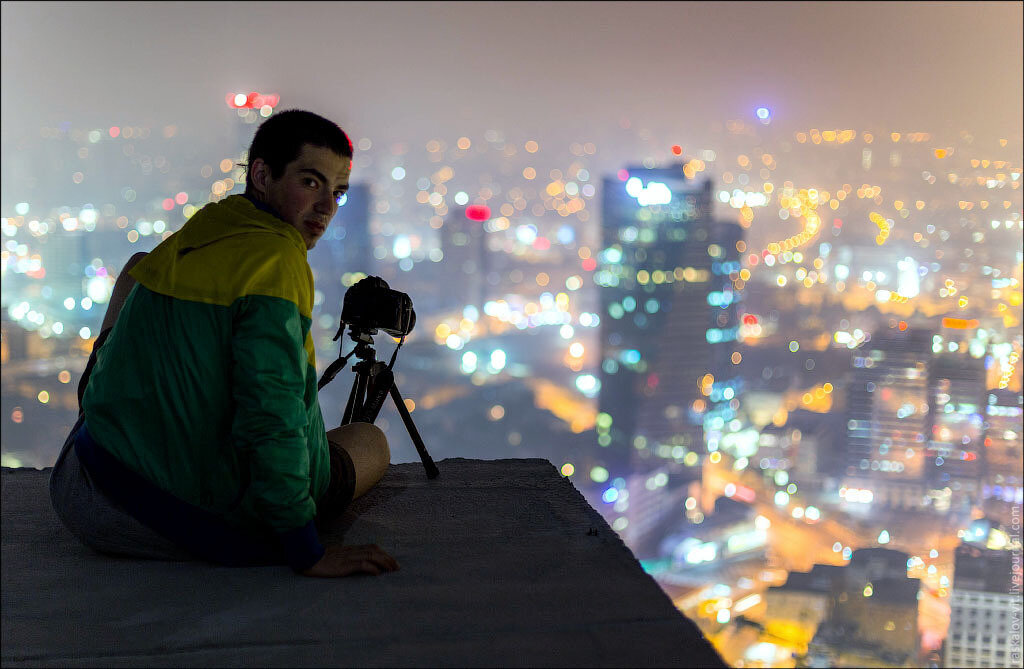 10. After night rooftopping and sleeping at place of Lesha’s friends on one of the roofs in the center of Tel-Aviv, we went to Jerusalem. 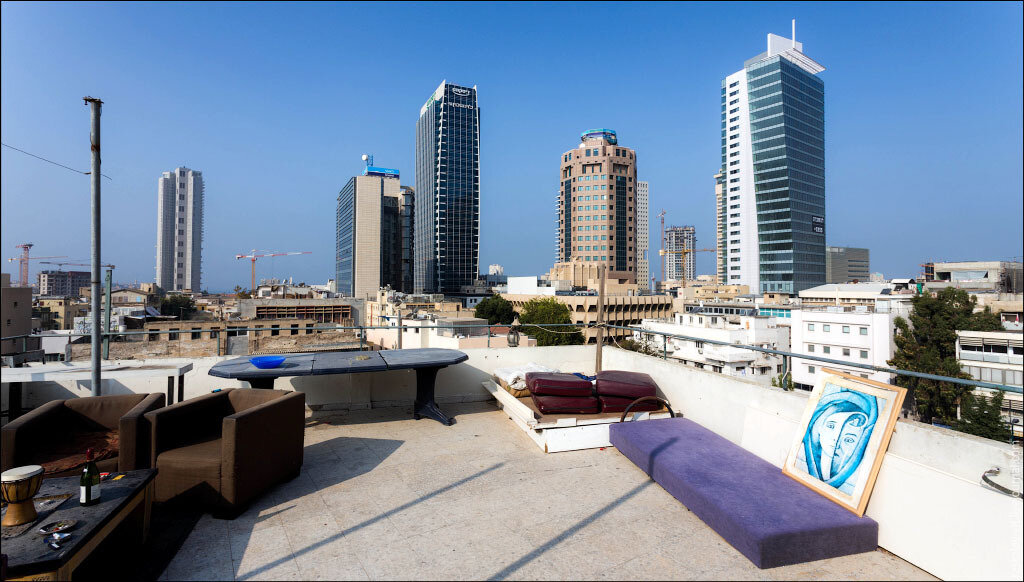 11. Jerusalem is an ancient city in the Middle East. It is the capital of Israel from 1949; Israel controls the whole territory of the city from 1967. Israel control over the eastern part of the city and Jerusalem’s status of the Israel’s capital are still unrecognized by a considerable part of the international society. This city is sacred for three Abrahamic religions: Judaism, Christianity and Islam. The Dome of the Rock mosque – one of the Muslim sanctuaries – is in the photo. 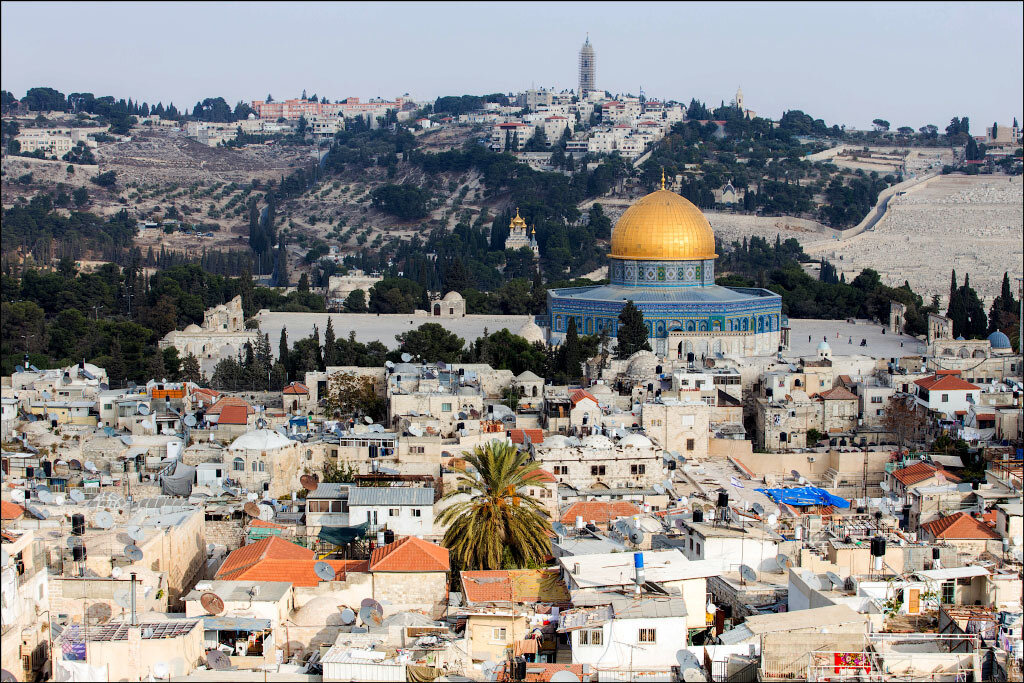 12. Mosques and Christian temples. From touristic point the city is much richer than Tel-Aviv, from rooftopping point – there’s nowhere to climb, tops of the majority of cathedrals have paid observation decks. Also on roofs in the Old City there are restaurants and you won’t have any troubles with getting there. 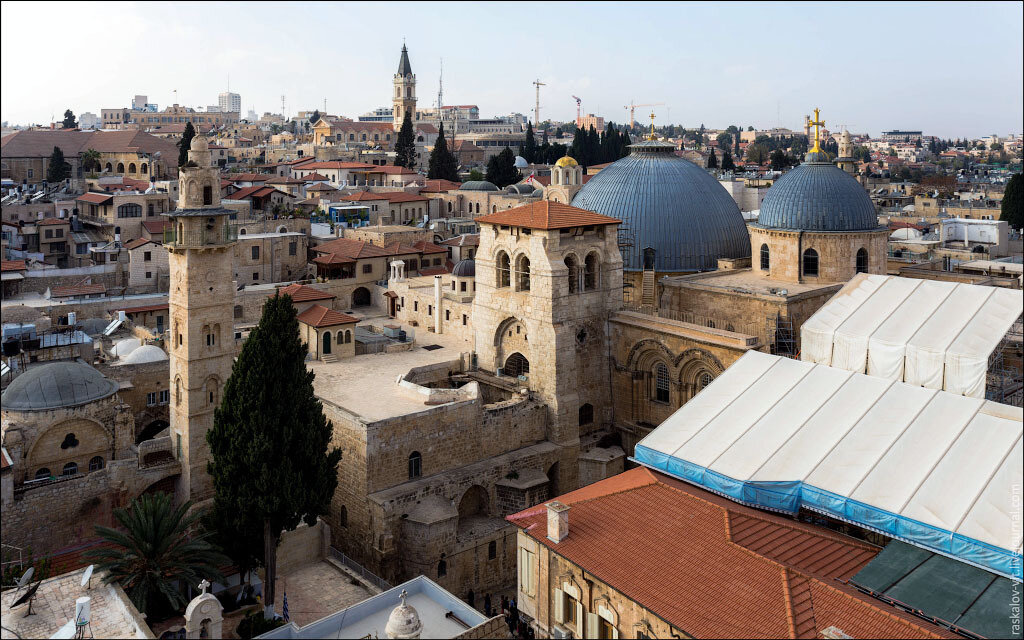 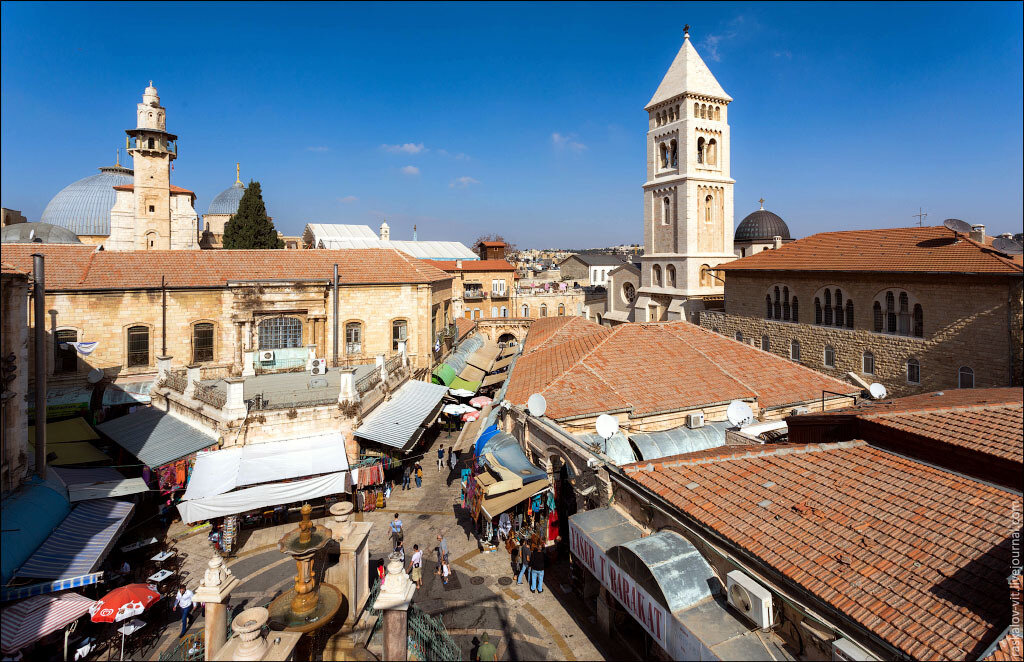 15. The Wailing Wall. It has barbed wire on top of it and the territory around is strictly controlled on the Arabic side. It is said that some time ago Arabs used to throw stones at Jews from the top of the Wall. 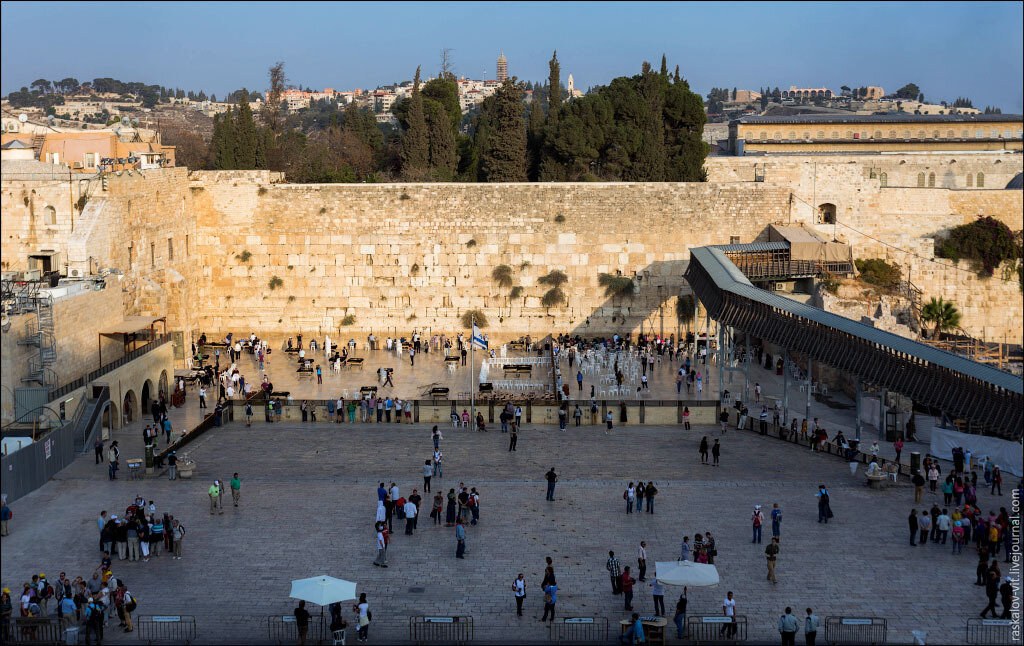 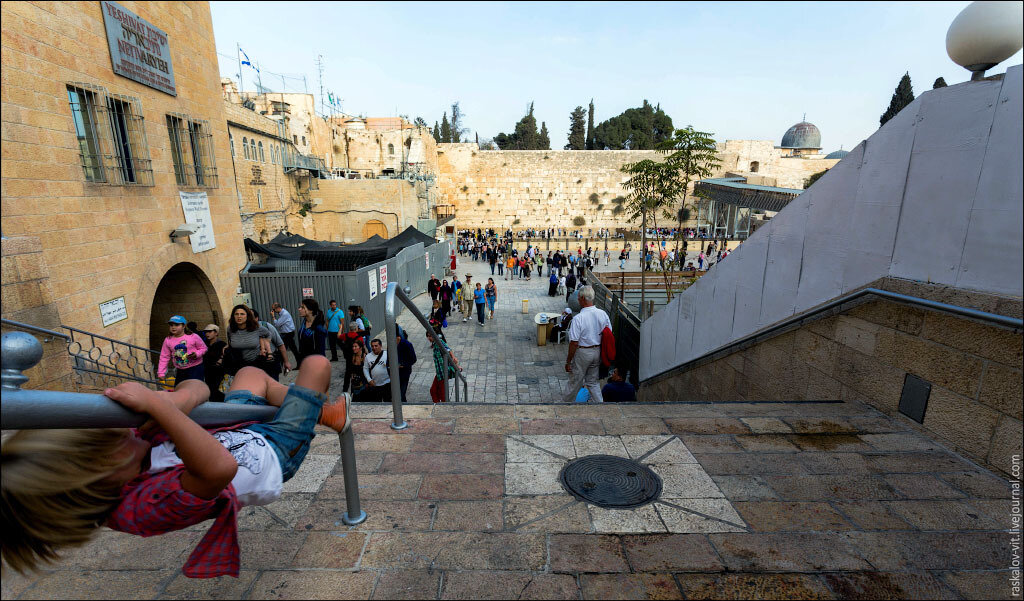 17. The dome of the Church of the Holy Sepulchre. 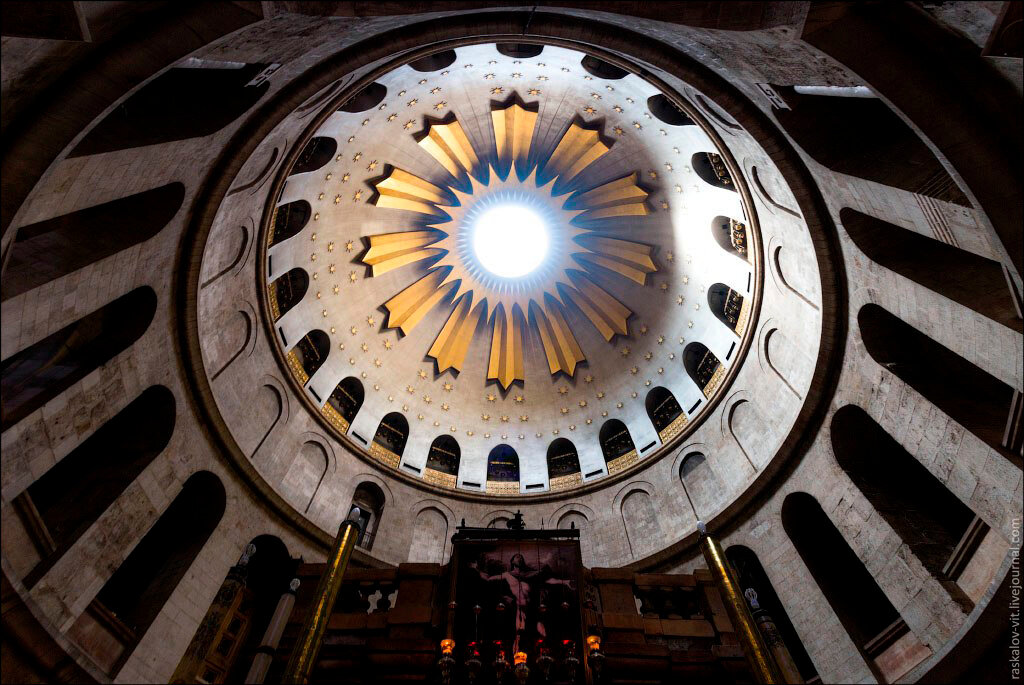 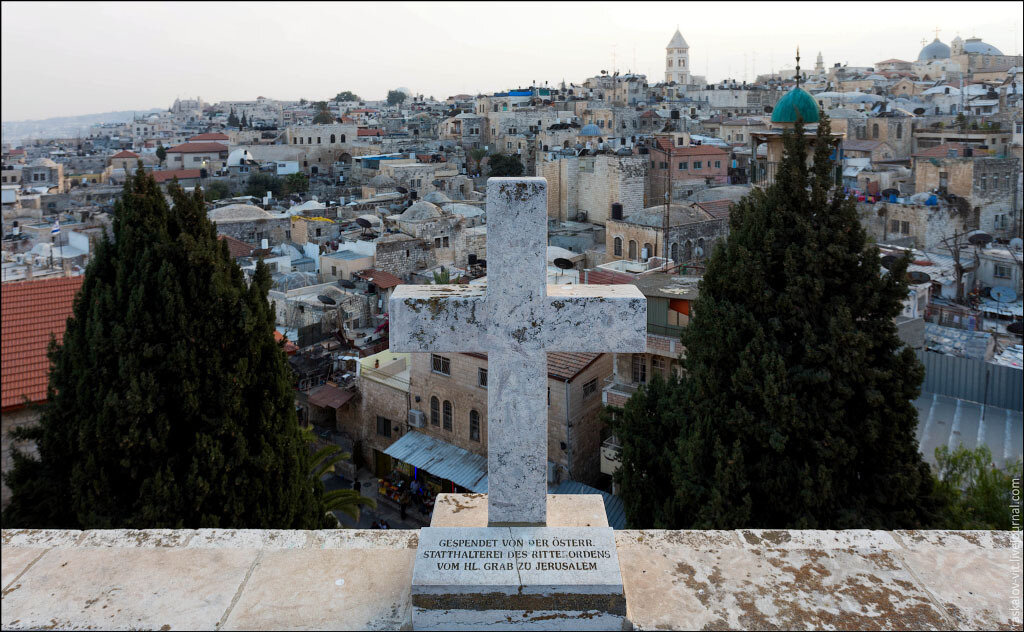 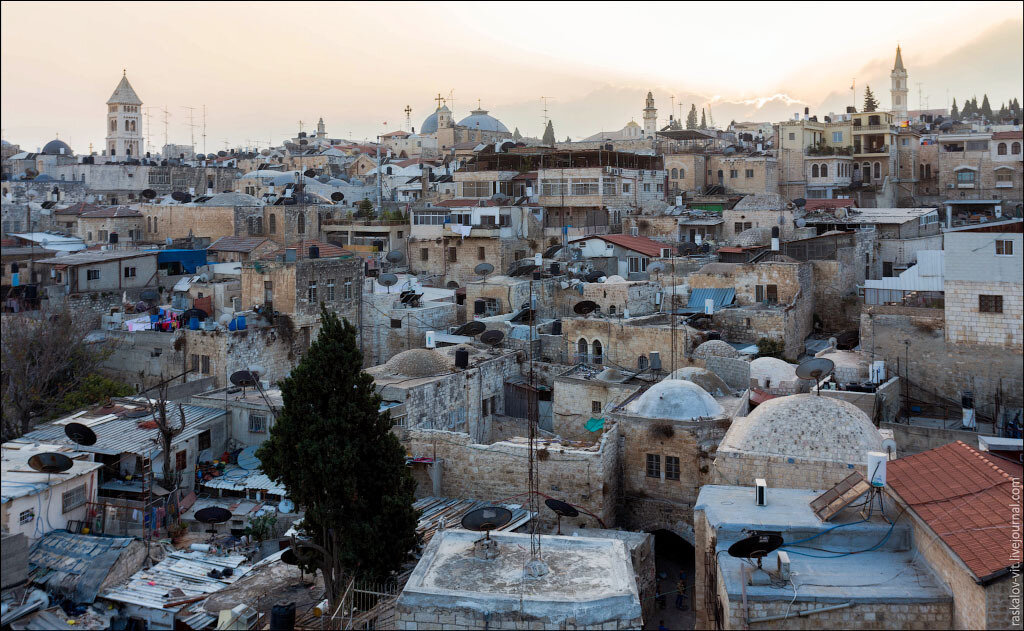 20. The center of the Old City is divided into two parts: Jewish and Arabic. There’s a check-point inside the City and it’s guarded by Israel soldiers. You can get to the Arabic part on special days only, when it’s opened for tourists and normally it’s not allowed – you get turned away by the soldiers. 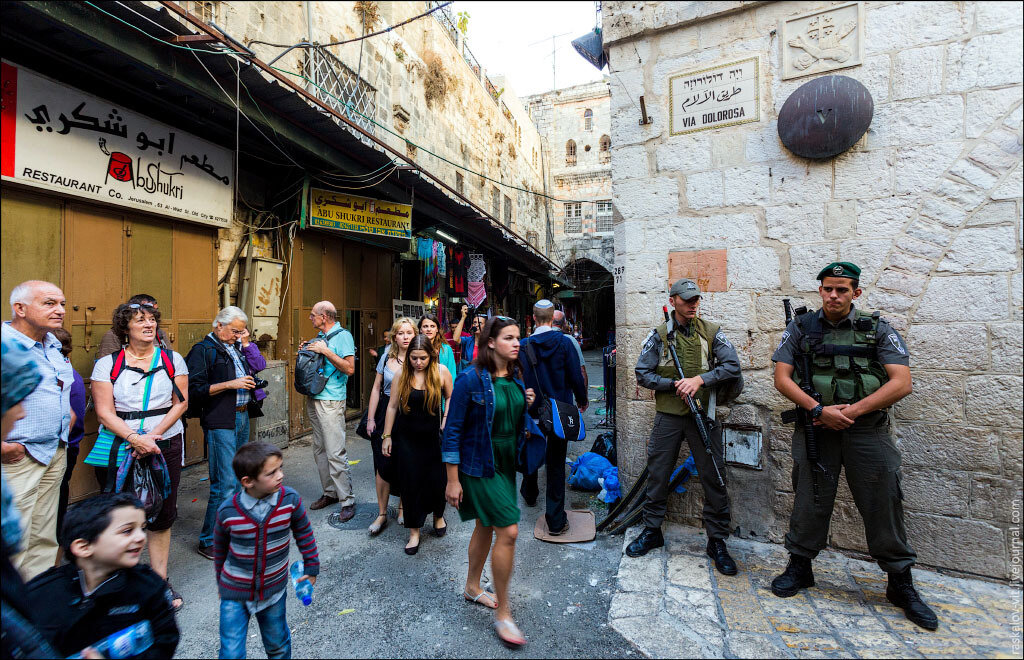 21. Side streets of Jerusalem, right here some guy told me to go to hell. After-pains won’t leave me till the end of my life. 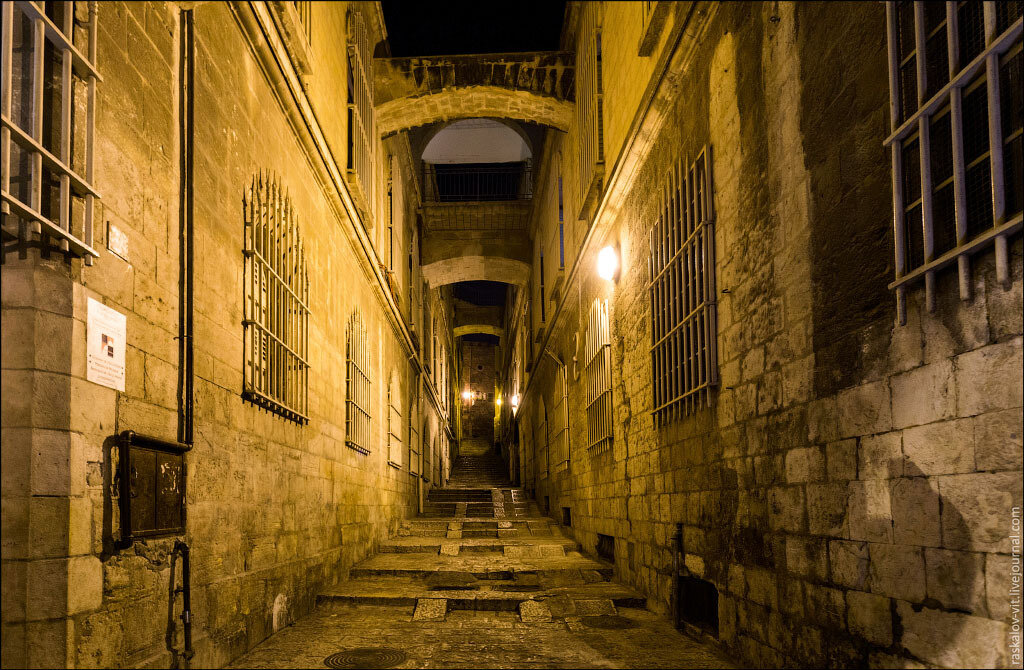 22. Almost half of the people in the city are Arabic; they all work at markets or as taxi-drivers. Israel government doesn’t allow them to take up public positions. 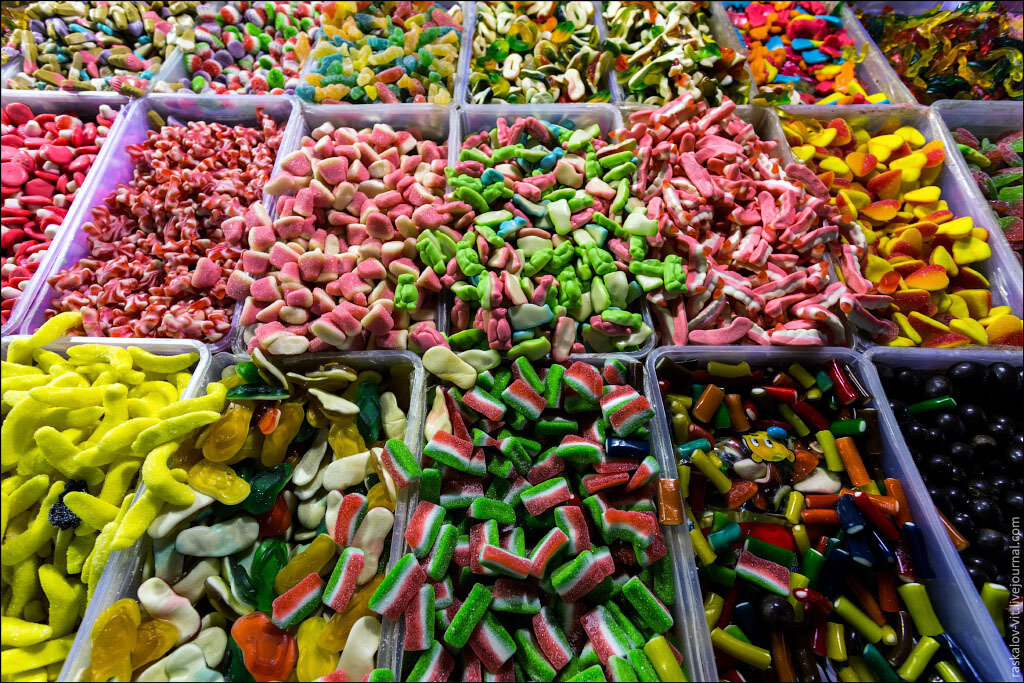 23. Our overnight in Jerusalem. It is really humid at night and after 10-15 minutes all your clothes, including sleeping bag, become wet. In order to not get our clothes soaked we had to sleep under the solar batteries. There are white tanks of waterheaters on all of the Israel’s roofs, while the Palestinian detail – black tanks of water intakes. Water is squeezed into them by pumps from underground rain-reservoirs (during those infrequent rains) and from water pipes, when Jews open their taps. By these black tanks you can easily realize that you’ve left Jews’ territory and have come to an Arabic quarter.

24. Jews have a holiday named Shabbat. In Judaism it is the seventh day of week in which Torah orders to refrain from work. From 17:00 of Friday till 17:00 of Saturday cities become deserted, shops and railway stations don’t work, and everything at all, even drugstores and police stations. 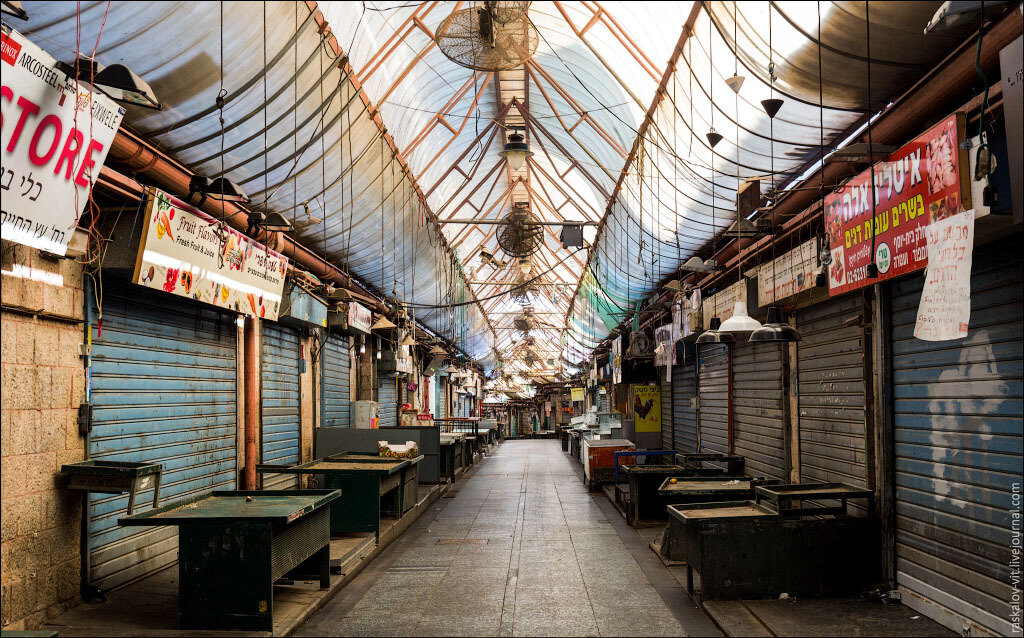 25. Arabic life is in full swing, shops and markets are working for tourists’ pleasure. 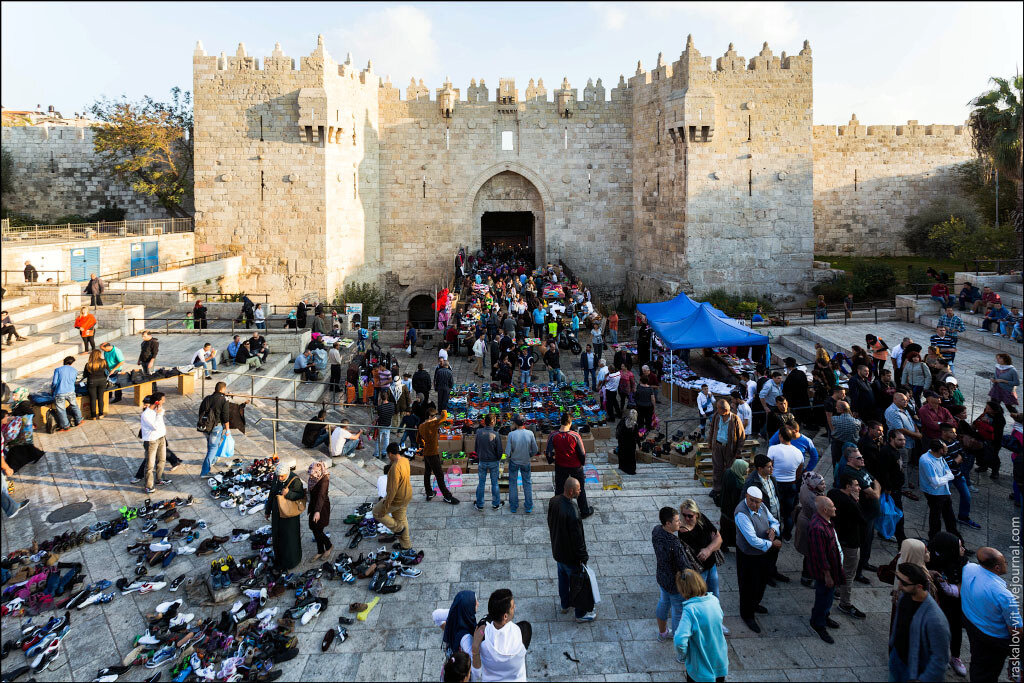 26. And this is Palestine. Unfortunately, I went to the Dead Sea region instead, where I crossed the border and got to Jordan. 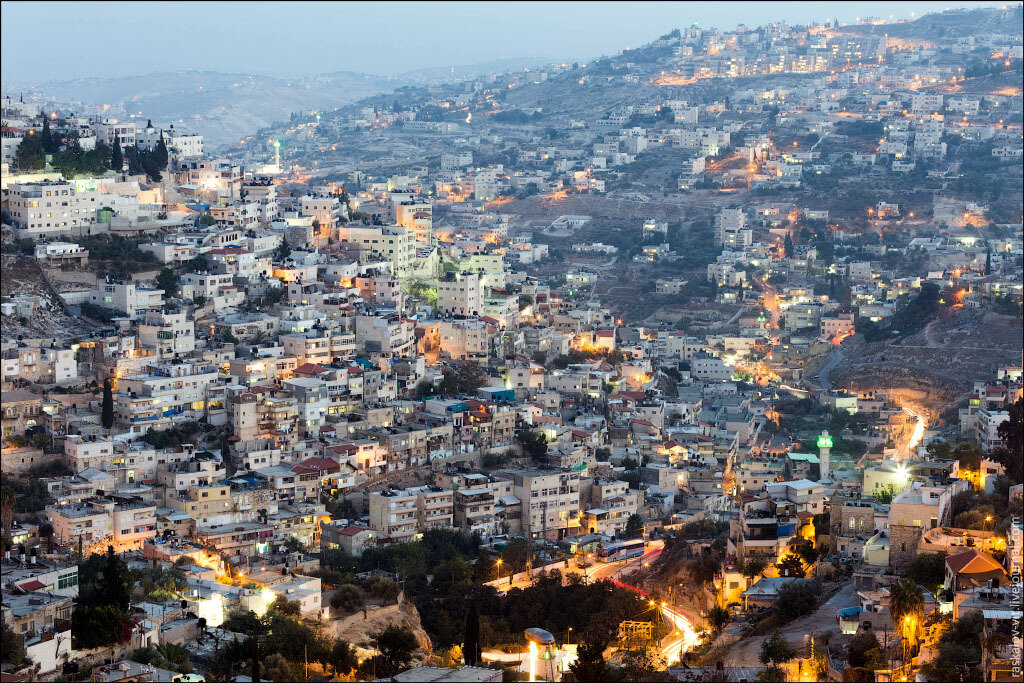 27. On my way to the Dead Sea I visited Masada. I climbed the mountain on foot and saved 700 roubles like a cool guy. 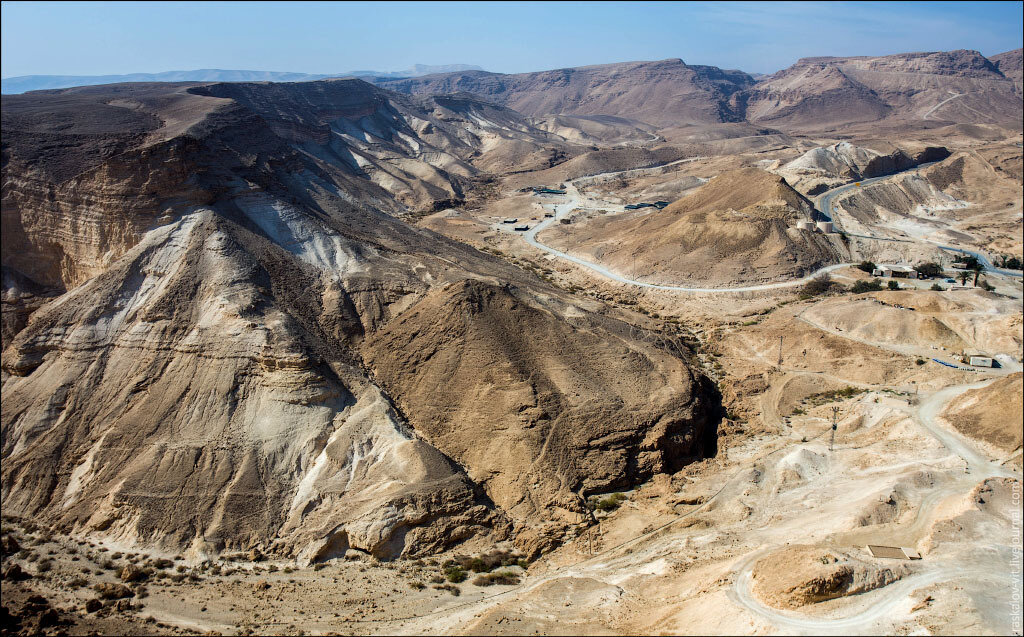 28. Masada is an ancient fortification in the Southern District of Israel situated on top of an isolated rock plateau on the eastern edge of the Judaean Desert, overlooking the Dead Sea.
In 66 CE, a group of Jewish rebels, the Sicarii, overcame the Roman garrison of Masada with the aid of a ruse. After the destruction of the Second Temple in 70 CE, additional members of the Sicarii fled Jerusalem and settled on the mountaintop. In 73 CE, the Roman governor of Iudaea Lucius Flavius Silva headed the Roman legion X Fretensis and laid siege to Masada. The Roman legion surrounded Masada, and built a circumvallation wall and then a siege ramp against the western face of the plateau.
Romans took the X Legion and a number of auxiliary units and Jewish prisoners of war, totaling some 15,000 troops in order to crush Jewish resistance at Masada. A giant siege tower with a battering ram was constructed and moved laboriously up the completed ramp. The walls of the fortress were breached in 73 CE. According to Josephus, when Roman troops entered the fortress, they discovered that its 960 inhabitants had set all the buildings but the food storerooms ablaze and committed mass suicide or killed each other. Josephus wrote of two stirring speeches that the Sicari leader had made to convince his fellows to kill themselves. Only two women and five children were found alive. Josephus presumably based his narration upon the field commentaries of the Roman commanders that were accessible to him. There are significant discrepancies between archaeological findings, and Josephus’ writings. Josephus mentions only one of the two palaces that have been excavated, refers only to one fire, while many buildings show fire damage, and claims that 960 people were killed, while the remains of only 28 bodies have been found. 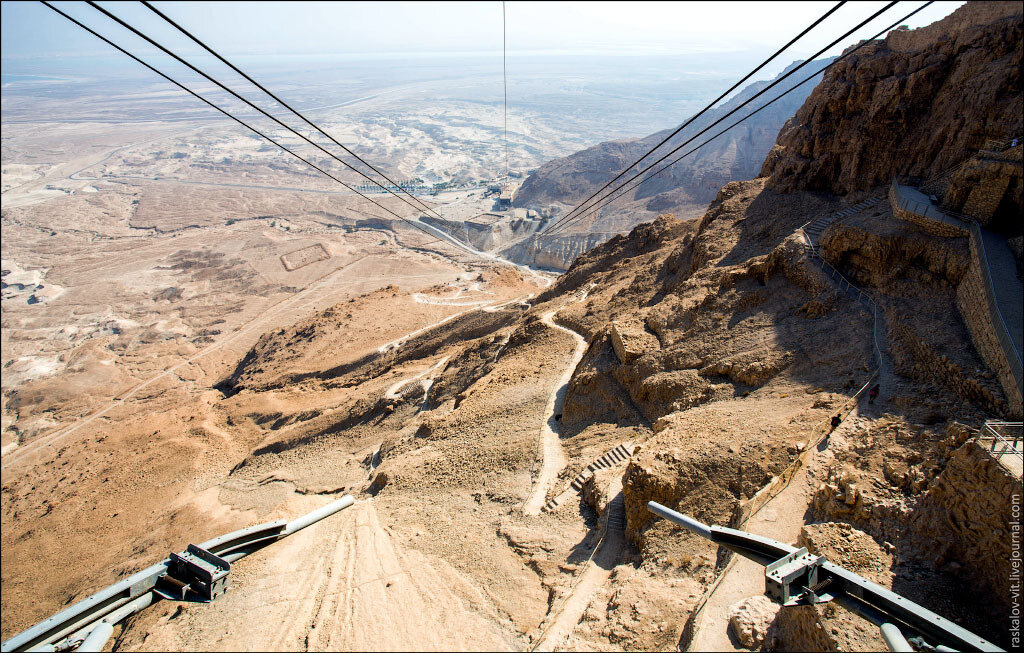 29. The Dead Sea is incredibly beautiful and awesome place. Unfortunately, the most beautiful parts are occupied by 5-star hotels and a huge number of Russian rude tourists. If they weren’t there, it would be one of the most awesome places that I’ve been to. 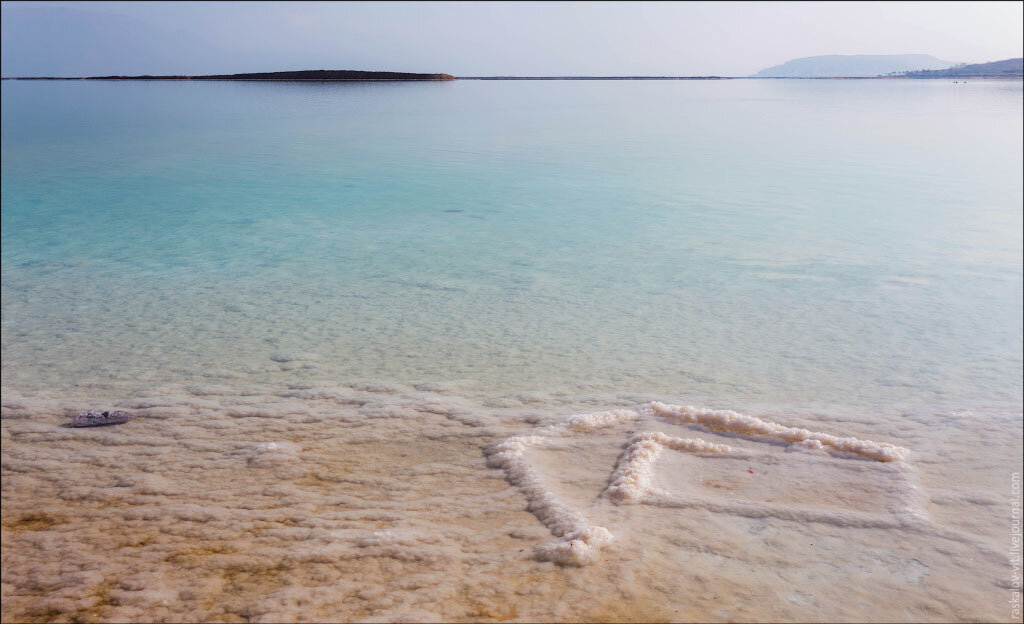 30. The Dead Sea’s surface and shores are 427 metres below sea level, Earth’s lowest elevation on land. The Dead Sea is 306 m deep, the deepest hypersaline lake in the world. With 34.2% salinity (in 2011), it is also one of the world’s saltiest bodies of water. The Dead Sea is 50 kilometres long and 15 kilometres wide at its widest point. 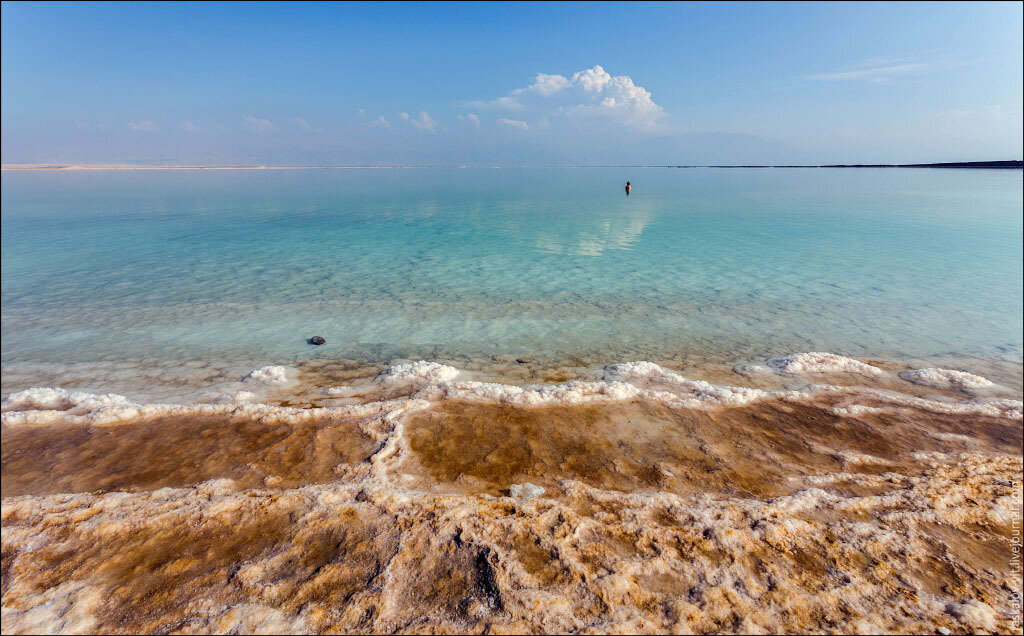 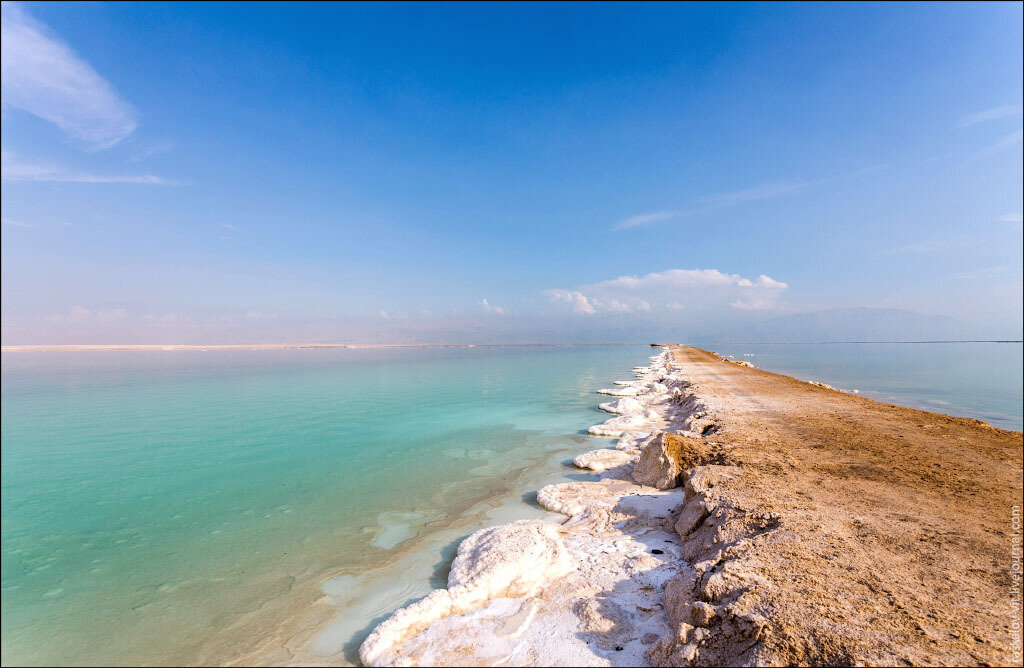 32. That’s how Israel ended. This kind of fence separates Israel and Jordan. In fact, it’s easy to cross the border on foot, but I was told that every 15 minutes a helicopter flies around this territory searching for trespassers. After the sea I headed to Eilat where I crossed the border of Jordan on foot and went to Petra. Visa in this region is free, but you have to pay an entrance fee of 100 shekels to Israel’s government. 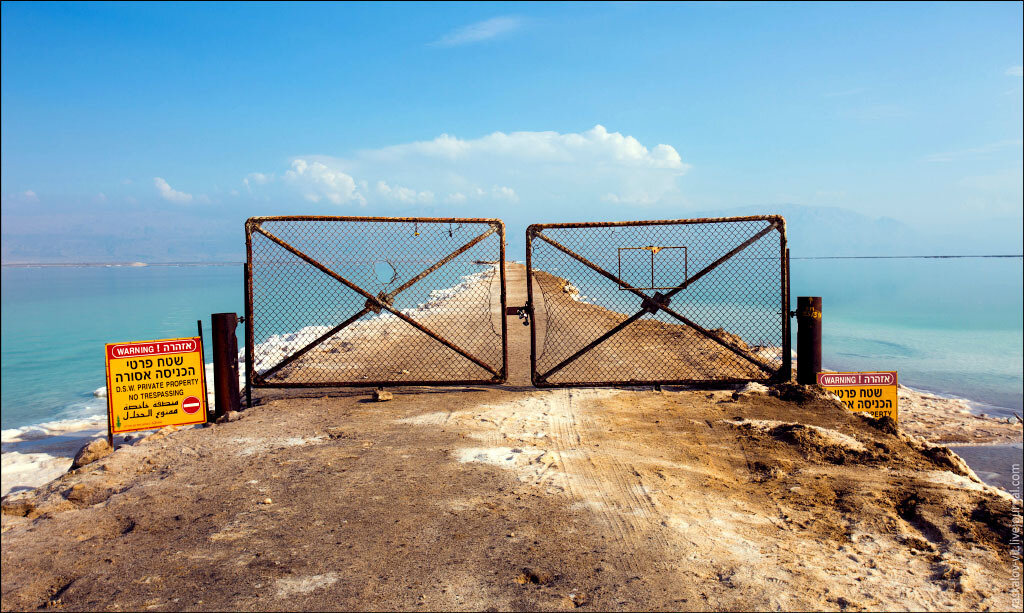